We Are All Wrong – Sleep Training Wars 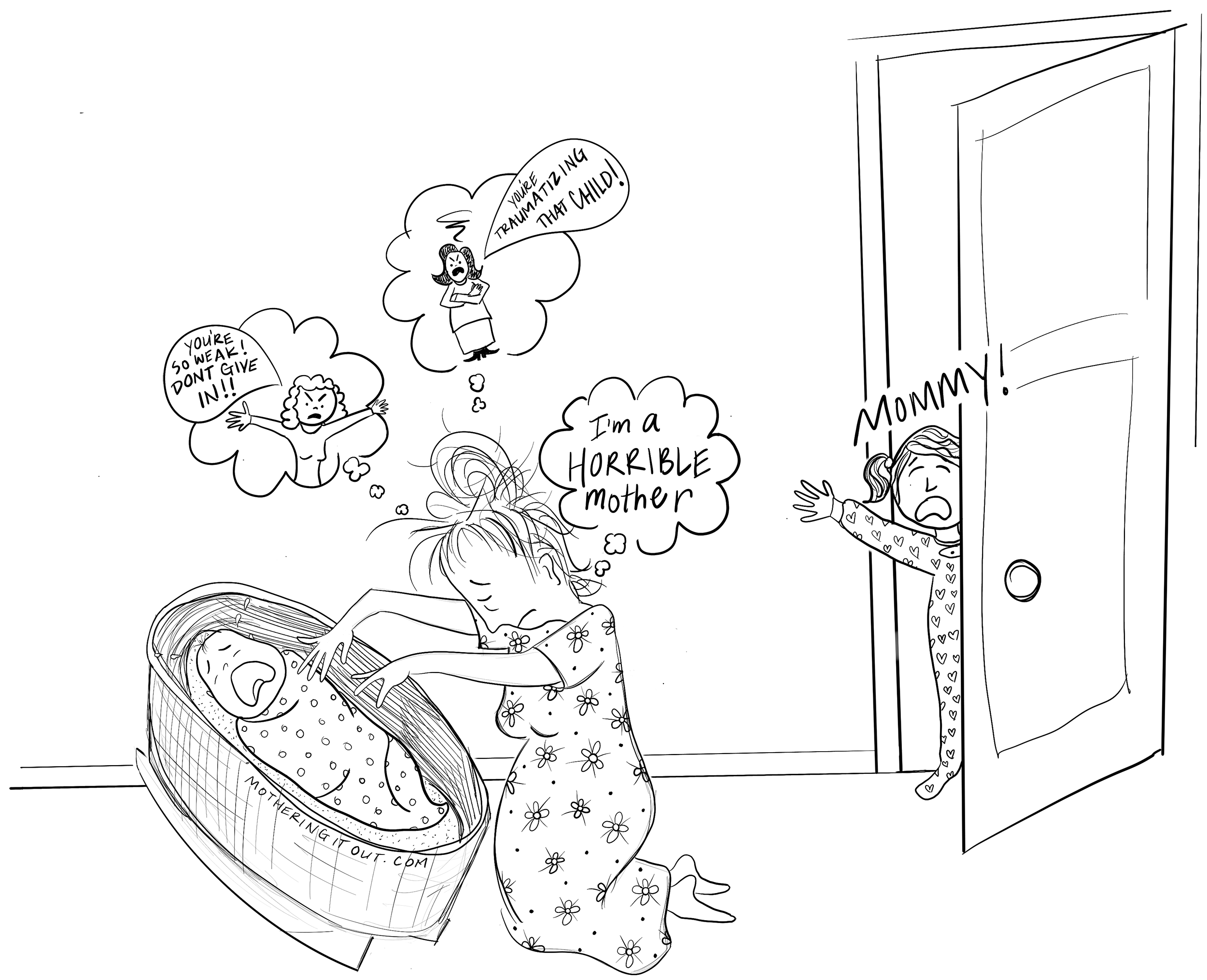 So, Why Are We Fighting Anyway?

We all have a bias! Whether it is conscious or not. This is definitely inciting all these sleep training wars.

A Facebook mom’s group post says “put your baby to bed however you feel best mommas but, here’s a huge whack of studies that prove no harm whatsoever comes from sleep training.”

Another post says “there’s not nearly enough support and encouragement for anti-sleep trainers…” then continues, “But..no judgement  to people who do it!”

Not surprisingly both posts had the comments switched off almost instantaneously. The first mom “sweetly” adding later “…I see that my very neutral post is getting ‘mom-shaming’ so I’m going to go ahead and close all comments now.”

Infuriating! Not just because I had retorts locked and loaded, but because you can’t call something neutral when it’s steeped in bias. It’s pretty obvious who was pro and who was anti-sleep training. It’s these sorts of mom posts that start wars, and they never properly get finished because usually the post is a grenade toss and run sort of thing.

Also, have we forgotten to be compassionate? I think we’re all just a little too self-righteous. It’s good to remember almost every mom in mother’s groups is trying her best. I’ve caught myself in the act of (unintentionally) hurting other moms feelings on this topic before. I refuse to do it again because it feels crummy. At the end of the day, if I met any of these moms in person, I know we’d probably be fast friends. Or at least have camaraderie about our pregnancy and child rearing experiences overall.

What Are the Anti-Sleep Trainers Saying?

People who are “against sleep training” are not usually against all forms. Usually just the extinction method or “Cry-It-Out.” They are against the idea of leaving your baby to cry for long periods of time, whether it is night time or daytime. They say it feels wrong on a primal level to let them cry without intervening. That we have an instinct to respond to crying infants and it goes against nature to repress that urge. They believe that by ignoring babies you are sending the message that you are not available to help them when they are suffering and this is traumatizing. It can create attachment disorders which are not visible until adolescence or adulthood. These are no small thing- they are theorized to be a reason behind anxiety, depression and addiction.

What are the Pro-Sleep Trainers Saying?

People who are pro sleep training often don’t feel there is enough hard evidence to prove letting their baby cry it out causes attachment disorders. They feel they are executing a standard practice. Or, they feel the consequences from being chronically under-slept outweigh the consequences of a baby enduring the CIO method. Often they are struggling in terms of having support. They either have multiple children, a job that has no flexibility, or numerous other confounding factors that make tending to the baby multiple times during the night an impossibility. Many of these families do not have extended family support, the financial means or physical access to an overnight nanny, or any kind of help. These mothers even mention that their mental health status makes the extinction method their only option.

Why it Gets Muddled

In many ways, not having to sleep train your child is a privilege not all moms have. You could even say that most moms don’t have any other option, especially since most moms work, or have more than one child who struggles to stay asleep. This is probably why it seems as though sleep training is just normal, and why you can feel isolated in your choice not to sleep train. It’s hard to know how many moms sleep train because they have no other choice, and how many do it because they actually believe it is beneficial to their baby. The attachment disorder theories are also linked to other forms of parenting neglect so it’s difficult to separate all the factors. There’s also all sorts of shame about the method you choose, fake bravado, or defensiveness because it’s such a touchy topic.

Why We Are All Wrong… All Of Us!

What both pro and anti sleep trainers need to understand is that in reality there is no proper data and no science to support either choice in the long run. Every study “that shows sleep training has no negative consequences” stops looking at a child around the age of five. And there are no studies looking at the damage a crying baby does to a mother’s mental health, or to the family structure (economic and otherwise) when it goes on for months without intervention.

-Zero studies have monitored the outcome and consequences (for or against) sleep training past children of kindergarten age.

-Zero studies have looked at how a mother’s mental health is affected after she endures sleep training her child when she didn’t want to.

-Zero studies measured the consequences (positive or negative) to the families as a whole after sleep training.

Why We Need To Stop Fighting About It

We all want sleep! We all really really want sleep! And–no matter what side you are on trying to get that sleep, there is a burden of proof that cannot be fulfilled with long-term scientific data. This leaves the many different sleep-time approaches up to the discretion of mothers and families themselves.

This is where we as moms need to decide if it’s worth waging war on one another, or if it’s probably best to support each mom in each individual circumstance the best we can. Placing careful attention on the mother who in either scenario has crazy challenges she has to face, and never wins a prize either way.  Always sacrificing something in the name of motherhood.

And at the end of the day, this is why we have these mother’s groups. To be a network of encouragement through all the unknowns and often thankless trials and tribulations of parenthood.

..and stop turning-off those comment sections willy-nilly! Debate and discourse are a vital part of hashing out these controversial issues. After-all, this is one of the ways we are “mothering it out.”